However, few know that he designed several solid, unpretentious but imposing country homes in Wales. We visited Llanerchaeron  also called Llanayron House. It was in the same family for a staggering 10 generations before the National Trust took it over. What an interesting home

One of Nash's most important developments were a series of medium-sized country houses that he designed in Wales, these developed the villa designs of his teacher Sir Robert Taylor. Most of these villas consist of a roughly square plan with a small entrance hall with a staircase offset in the middle to one side, around which are placed the main rooms, there is then a less prominent Servants' quarters in a wing attached to one side of the villa. The buildings are usually only two floors in height, the elevations of the main block are usually symmetrical. One of the finest of these villas is Llanerchaeron, at least a dozen villas were designed throughout south Wales.

What an interesting home in the beautiful Welsh countryside. Corbetta Powell was from a prestigious family near Aberystwyth & as a teenager, she stayed at the original house of the Lewis family which was much smaller. Her & William Lewis fell in love & married in 1786 at Llanbardarn church.

They hired the fashionable young architect, John Nash to design an Italianate villa style home for them. It had elegant symmetry & was  comfortable rather than impressive, a family home to be lived in rather than for show. The downstairs rooms are comfortable & you can well imagine them being well used by the family for several generations - well thought out spaces which sit well in the lovely Welsh hills. 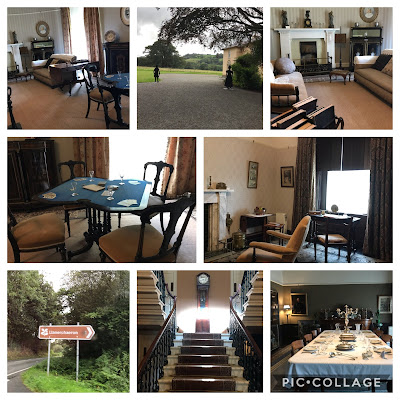 The upstairs bedrooms were all light, airy & spacious, accessed by an elegant, but in keeping, staircase. 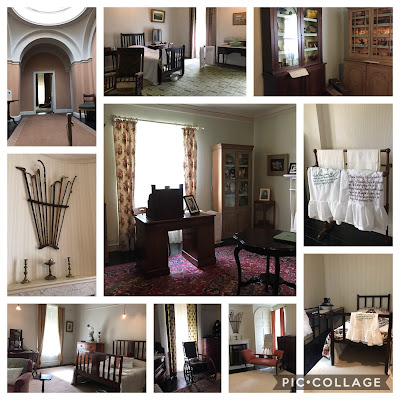 The house has an attached courtyard & buildings built to join to the house. The downstairs kitchen is in keeping with preparing food for a large family & visitors. There is a staircase leading down from the bright ladies parlour / study to the wine cellar below - very handy. 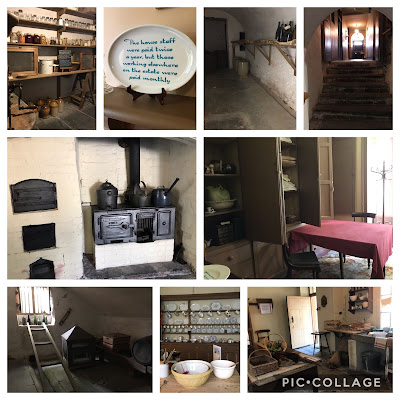 The bread ovens can be seen next to the kitchen range - the numerous ovens were probably in huge demand & I take my hat off to the skill of the cooks / bakers who prepared meals for so many people in such basic conditions.  How I would love a sideboard that large to have my lovely china to hand ... 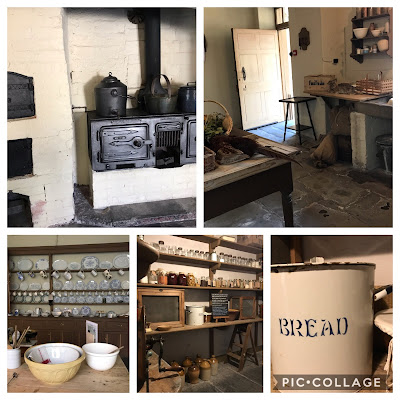 Those who romanticise this era do not appreciate how much work it all involved to keep it all going. The laundry room bears testament to how much work it must have been to keep all the bedding washed, pressed & ready for guests.

Look at the stove - it is the first time I have seen a stove with spaces to heat so many irons at once. I can only imagine how much work it was .... 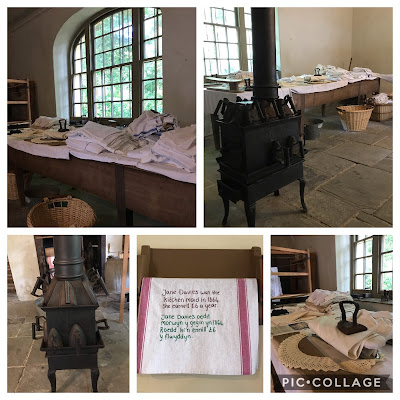 Each process has its own space & at that time, I imagine they all had their own servants too. The brewery would have been an essential space when drinking water was not safe. 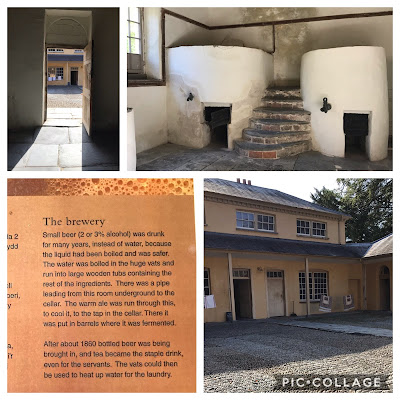 The bakery space with its many bread ovens, the stunning wooden dough proving container must have seen so many loaves of all sorts being prepared in it ... 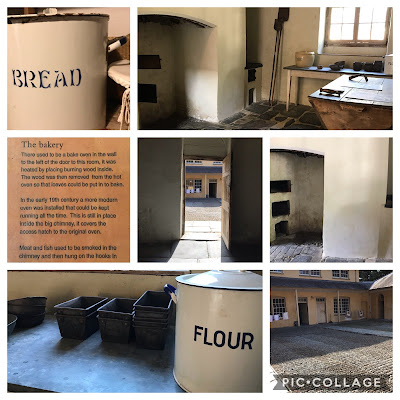 The dairy & cheese making rooms - huge with so many different processes to make sure that the family were provided with milk, cream, cheese, butter etc 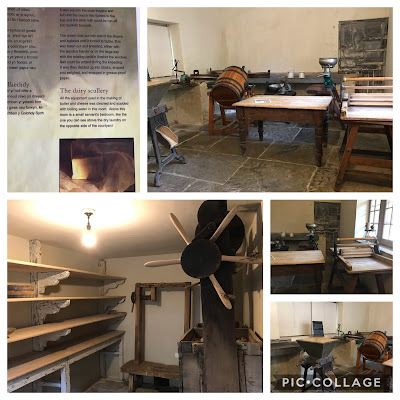 The billiard room contains the history of the family, a cut stump with its rings tells the story of 10 generations who lived there - a reminder how the whole estate relied on the farm, the kitchen gardens, the people, the butler, housemaids, housekeeper & numerous other servants, the larger community it was part of. 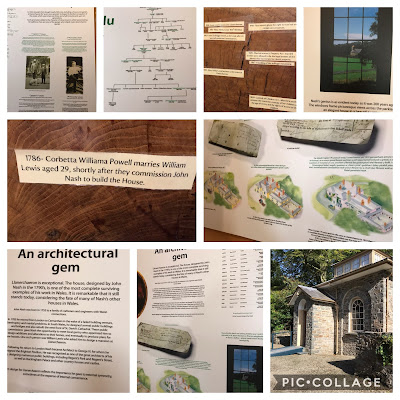 Another cluster of buildings housed the stable block with the tack rooms & carriage house - all essential in an estate of this size ... 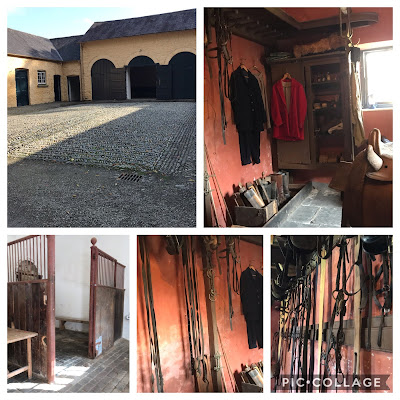 Llanerchaeron also had its own farm to supply its needs - the cowsheds, chicken enclosures etc are beautifully laid out - essential part of the once large estates. 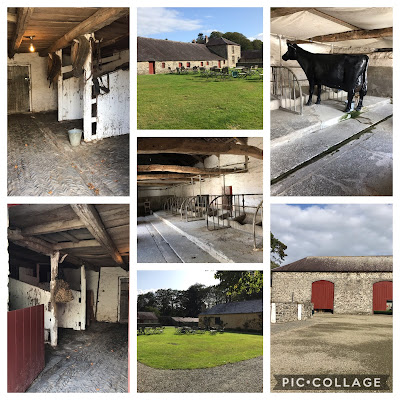 No large estate would have been without elegant walled gardens where produce was grown for the kitchen, flowers for the house & a herbs for medicine & cooking.

The river Aeron would have provided fresh fish & was home to wildlife on the estate too. The surrounding woods would have had deer, rabbits, fungi etc which would have been part of the culinary delights at meal times.

The elegant lake has outline of Thomas & Anne Lewis, who were equal partners, a modern marriage in 1892. 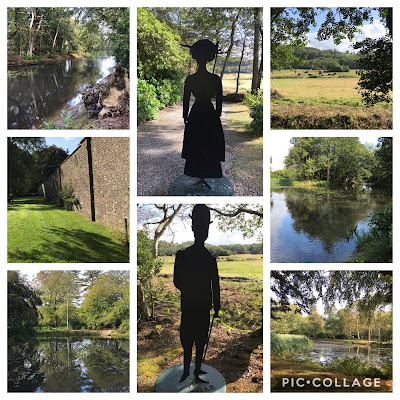 A fascinating visit - not long enough as it was at the end of our visit, but then a successful visit should leave you wanting more.

I sat surveying the lovely scenery while enjoying a welcome cuppa with a biscuit - that is why flasks are so useful. 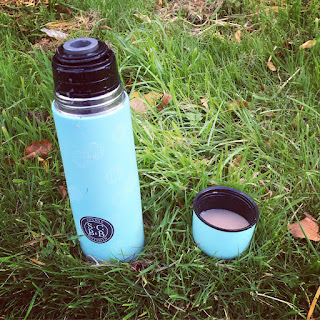 Thank you for stopping by, I hope you have enjoyed exploring with me. I always read your comments & they are much appreciated,
Dee ~💕~