The beauty of paisley

I freely admit to always having had a bit of a soft spot for paisley patterns.

The New Oxford Dictionary describes it as:

The pattern is common in ancient art from Iran & India where it has been used for centuries, sometimes called the 'curled leaf', ''kidney', mango' or 'teardrop' pattern. It is also used in traditional jewellery.

Early paisley designs were imported from the East to Europe in the 16th & 17th centuries; the intricate patterns & colours became fashionable but the pattern was difficult to copy until the 19th century when weavers in the Scottish town of Paisley made it their own.

Scotland has a paisley town / Paisley where according to Wikipaedia "By the 19th century, Paisley had established itself as a centre of the weaving industry, giving its name to the Paisley Shawl and the Paisley Pattern."

Many of us associate the paisley pattern with pajama's aimed mainly at the older side of the market & a silky type paisley dressing gown or ties ...

Last week, I received an unexpected gift from myra ahmad - please visit her amazing blog & read her poetry. She has already published a book of poems at just 18 ...

Myra sent a beautiful scarf from Pakistan in my favourite colours & I am very pleased with my gift - thanks Myra :) 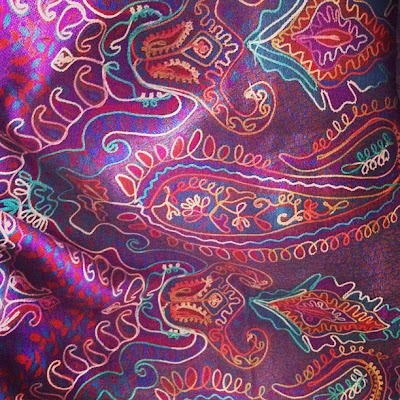 While browsing today, I noticed that ralph lauren PAISLEY is also trending paisley this season.

Certainly no sign of the grandpa Paisley we often see, but up to date & vibrant pattern & colour - mixing paisley with modern prints ...

So my scarf is right on trend & I look forward to some vibrant patterns in the shops this season, though I am not convinced by Givenchy's ethnic paisley ....

Are you a paisley fan or do you still struggle with its traditional image.

Thanks for stopping by, please follow & leave your link so I can return the visit.