On a visit to the tiny Karoo town of Aberdeen in South Africa,  my eye was drawn to a blue plaque on a house in Brand Street & I walked over to read it. 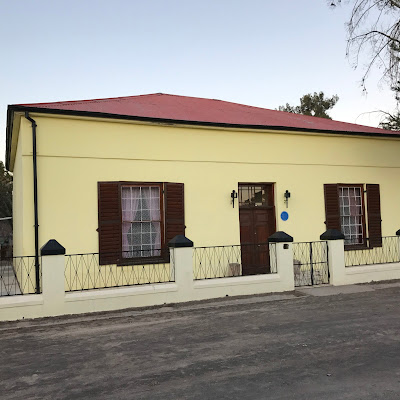 What an amazing history collided in this tiny town!

I am a great Boer War follower, having had family who fought on both sides of the war ....

One of the famous historical figures that saw action in the Aberdeen district during the 2nd Anglo Boer War was Lawrence Edward Grace Oates. Serving in the 6th Inniskilling Dragoons he suffered a gunshot wound to his left thigh in March 1901 which shattered his leg and left it an inch shorter than his right leg when it eventually healed.

In that skirmish he was twice called upon to surrender, and replied “We came to fight, not to surrender.” He was recommended for the Victoria Cross for his actions. He was promoted to Lieutenant in 1902 and Captain in 1906. He later served in Ireland, Egypt, and India. He was nursed by the Harvey family of 16 Brand Street in Aberdeen where he celebrated his 21st birthday. The wound caused him a lifelong limp.

The name of Captain Lawrence Edward Grace Oats is well known & it is forever associated with his selfless act of walking out in to the snow blizzard on his 32nd birthday, to his death so that he would not hinder the rest of the Antarctic team. 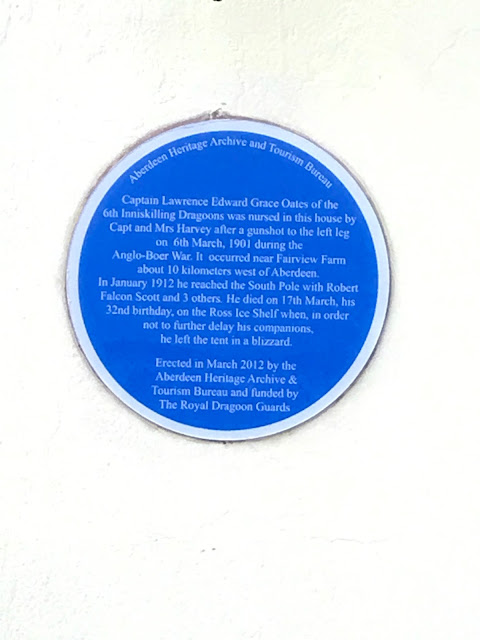 According to Capt Scott's diary, his last words were: 'I'm just going outside and I may be some time.'

What an amazing story of an amazing person whose life is celebrated in the tiny town, where his injury in the Boer War led him to make his final decision.

I did not know this connection until I walked over to read the blue plaque on that wall but now that I know the story, I have a deep respect for how history was shaped in Aberdeen.

I hope you have enjoyed this story with me. Thank you for stopping by,
Dee ~♥~