It will be no surprise that while in the Karoo in South Africa, a piece of blue pottery caught my eye. I have a love for blue pottery so bent down to prize it free ….

It was not an ordinary piece of pottery - it was a tiny blue fragment in the large yard that had not been dug over for years ,….

However, I am getting ahead of myself - my brother is renovating a very large, architecturally stunning house in the Karoo in South Africa. 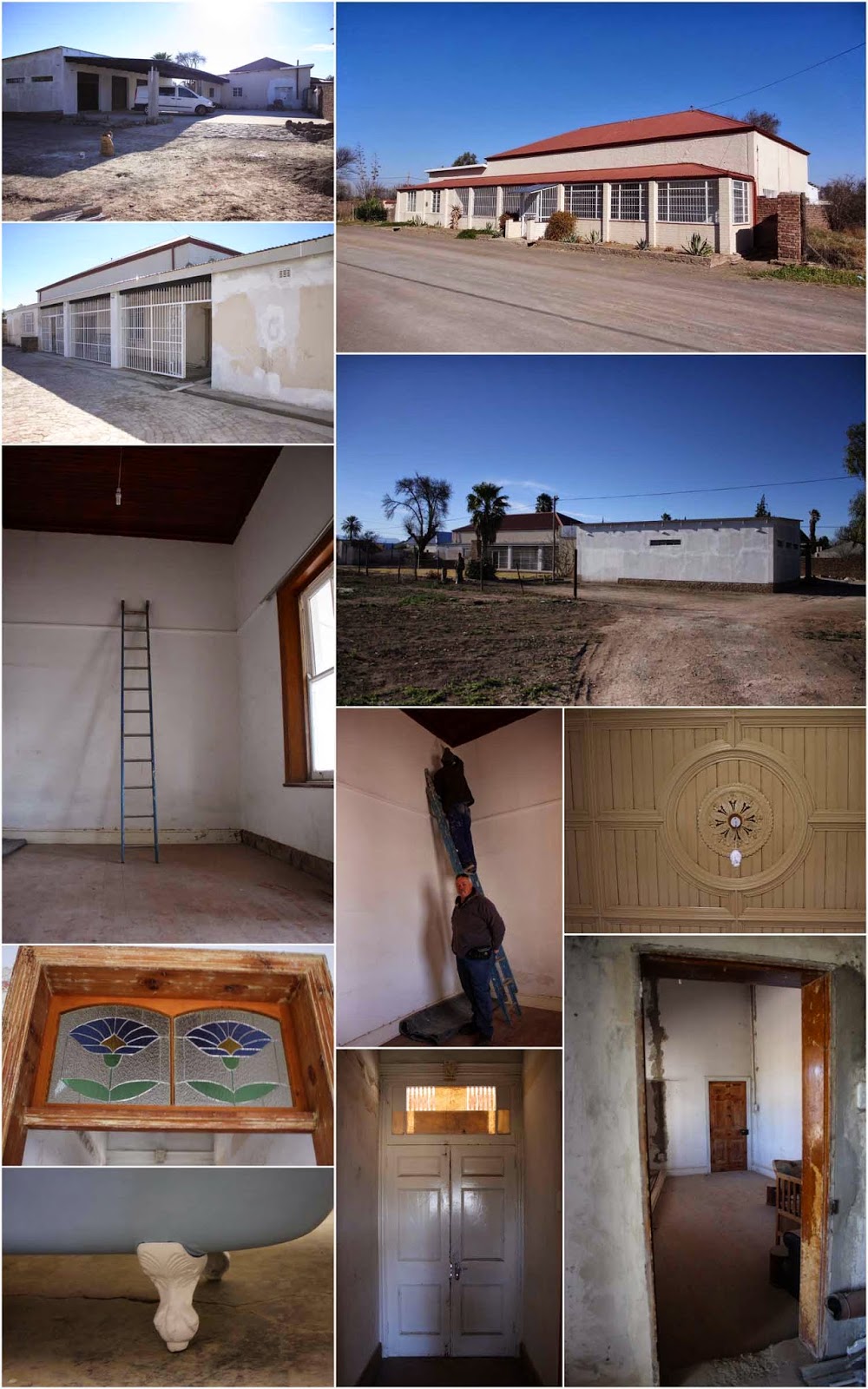 It stands on a large plot with a large garden behind it & while walking around chatting to my Dad in the Winter sunshine, I saw this glimpse of blue peeking out …. 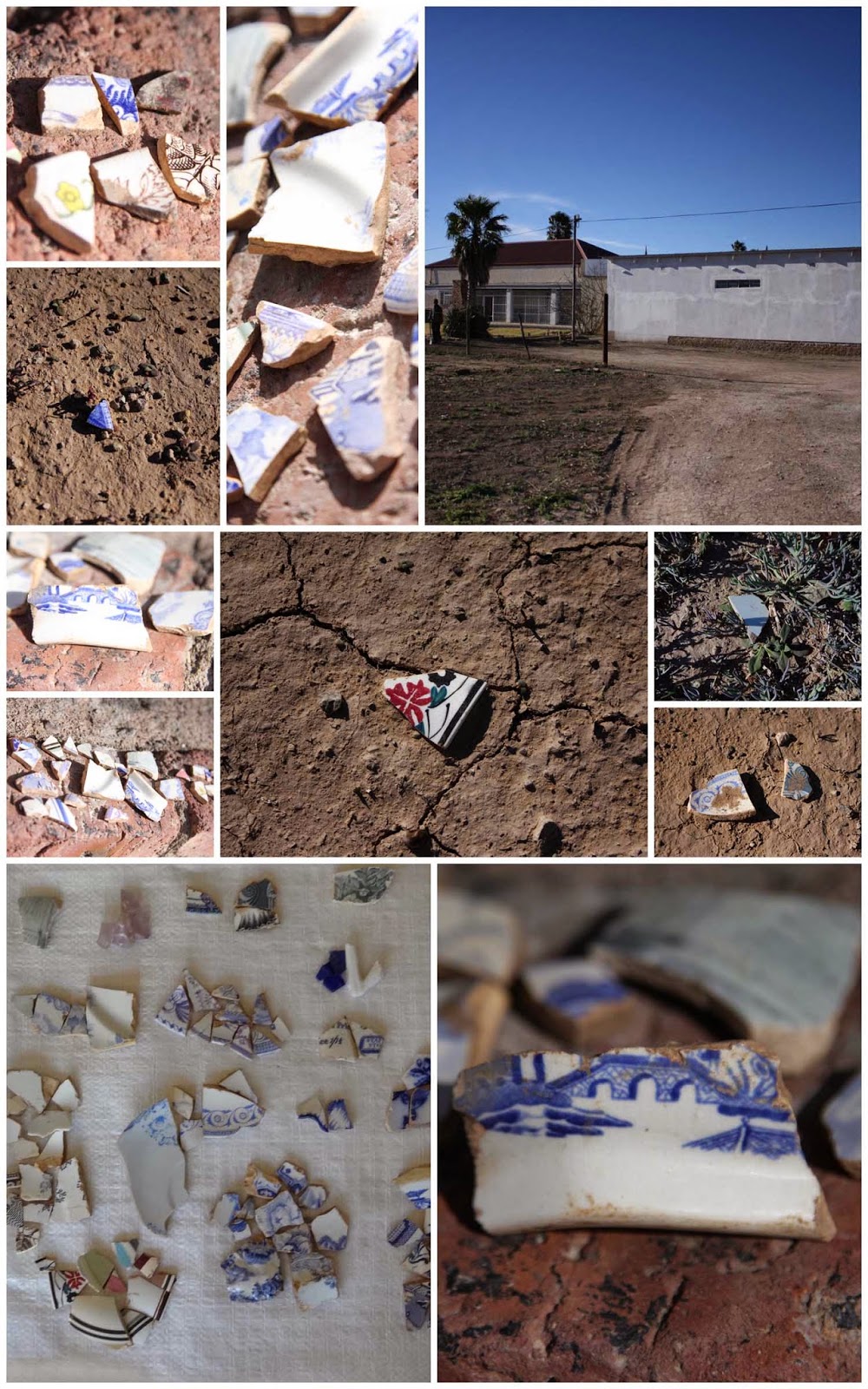 I flicked it over & my curiosity was immediately aroused - I just knew that in times past, before rubbish was collected, it was just buried in the garden & I knew that the same happened with the broken crockery from the house. 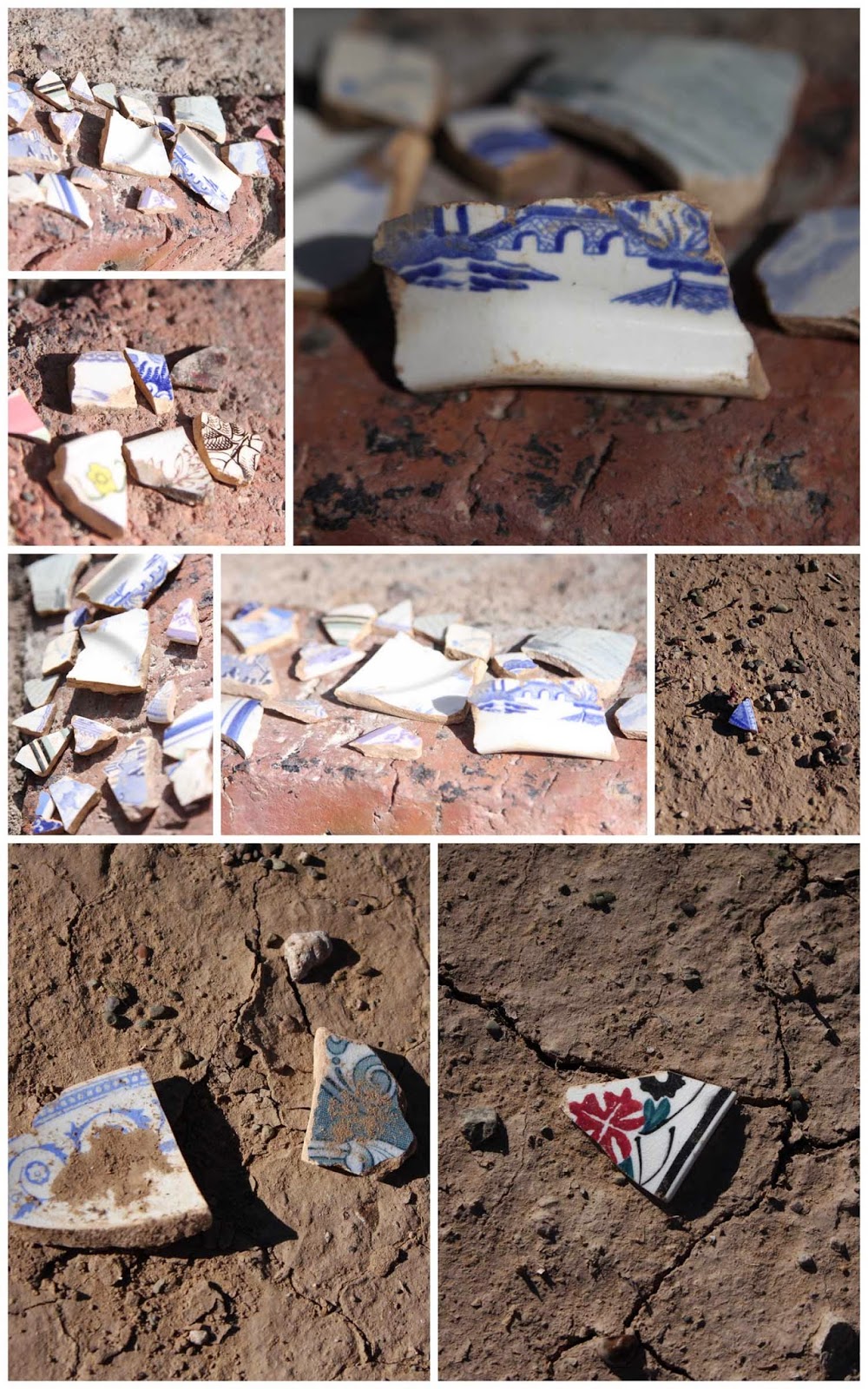 So Dad & I wandered around often & found some other pieces too in the hard, sun baked earth. 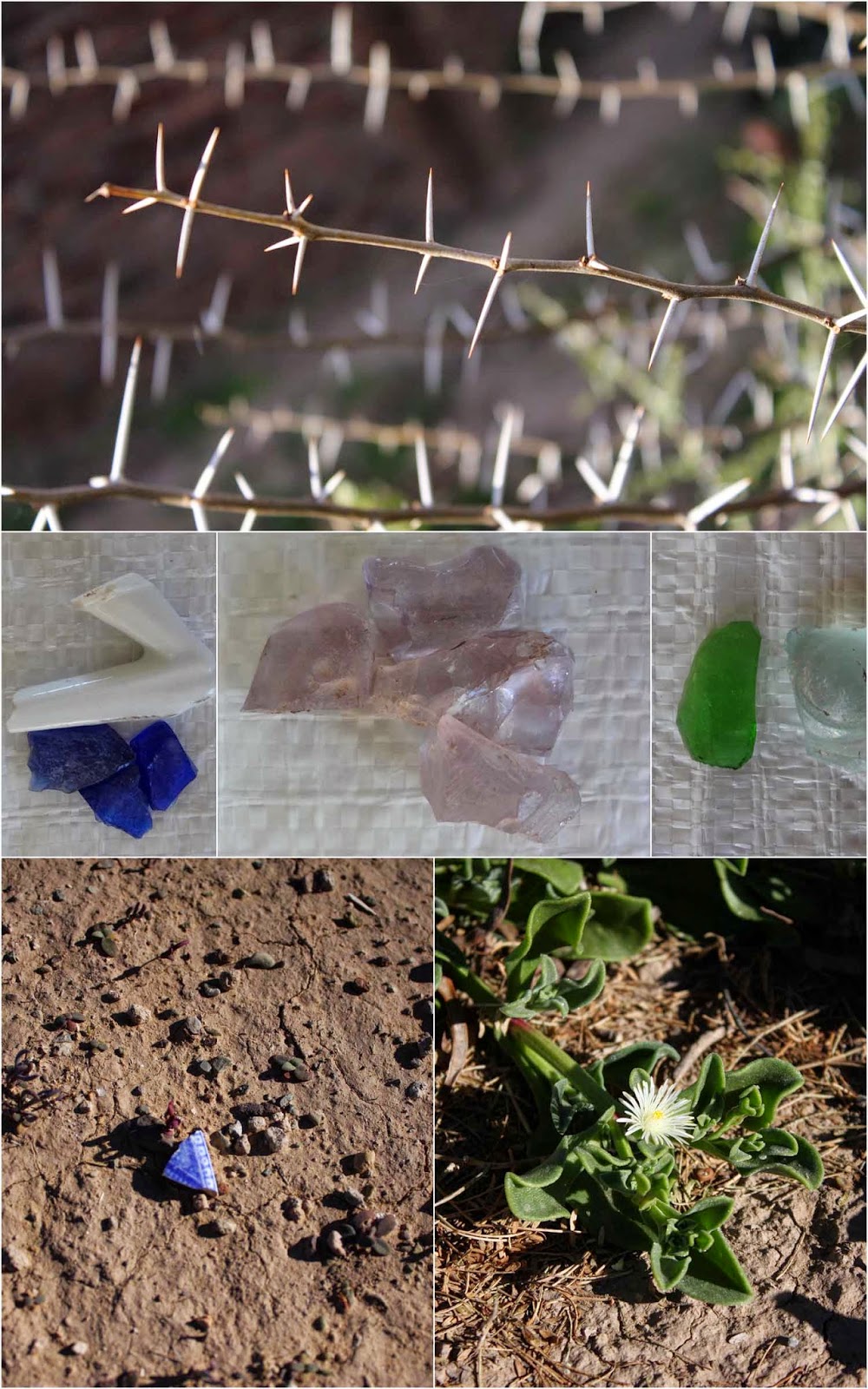 The gardener was curious & when he saw me collecting the bits, he too took to collecting them while he was digging new vegetable patches.

Each day, he would line up the pieces for me on the BBQ wall & I was really interested to see patterns emerging. Dad & I continued our walks around, often returning with new bits of pottery & some glass & even gemstones.

I would wash them all in warm soapy water, then inspect the patters. We all put them on a white bag from the farming shop & would shift them around & speculate on the dish that it had come from. 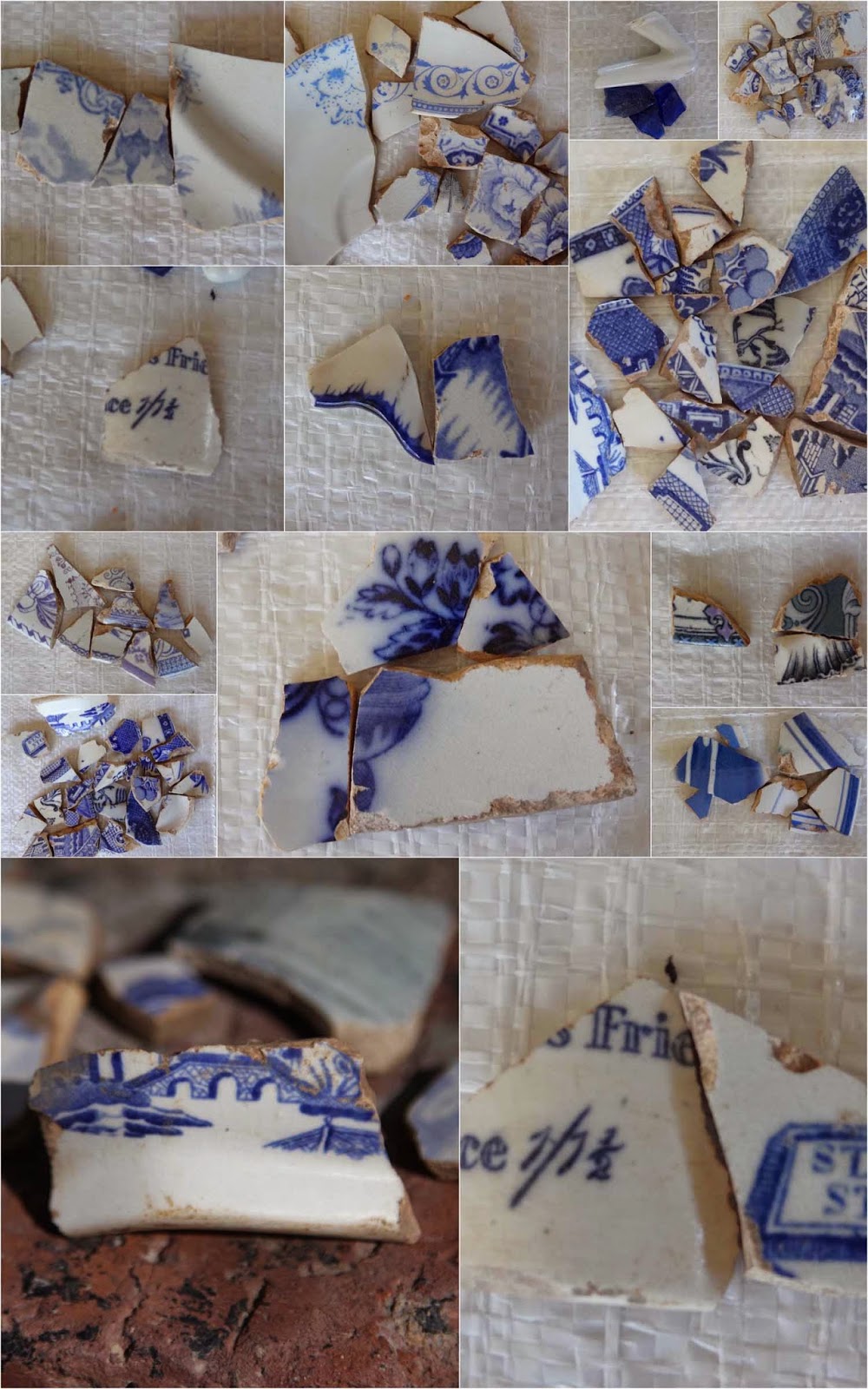 The marking of 'STOKE' & 'STAFFORD' can clearly be seen & it is ironic that I live close to the potteries of Stafford now & to think that this pottery & china pieces made their way to South Africa from the potteries in a ship, then transported all over the vast country thereafter, was sobering. Perhaps the original house owners even brought some pieces out to Africa with them from England in colonial times. 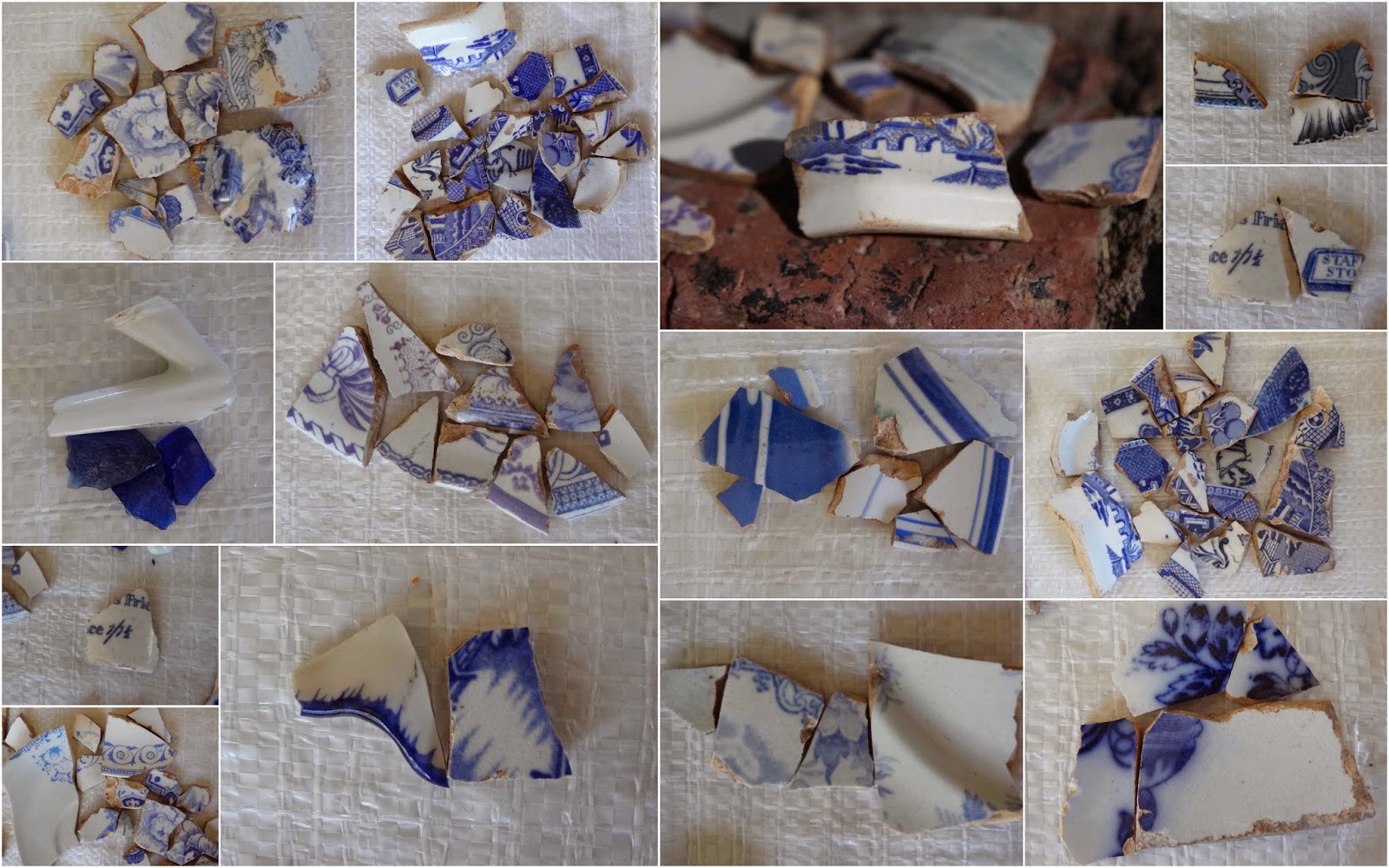 I could only imagine the heartache of breaking a favourite piece of blue & white pottery - some are the old blue & white flow wares, and others the familiar blue willow pattern. 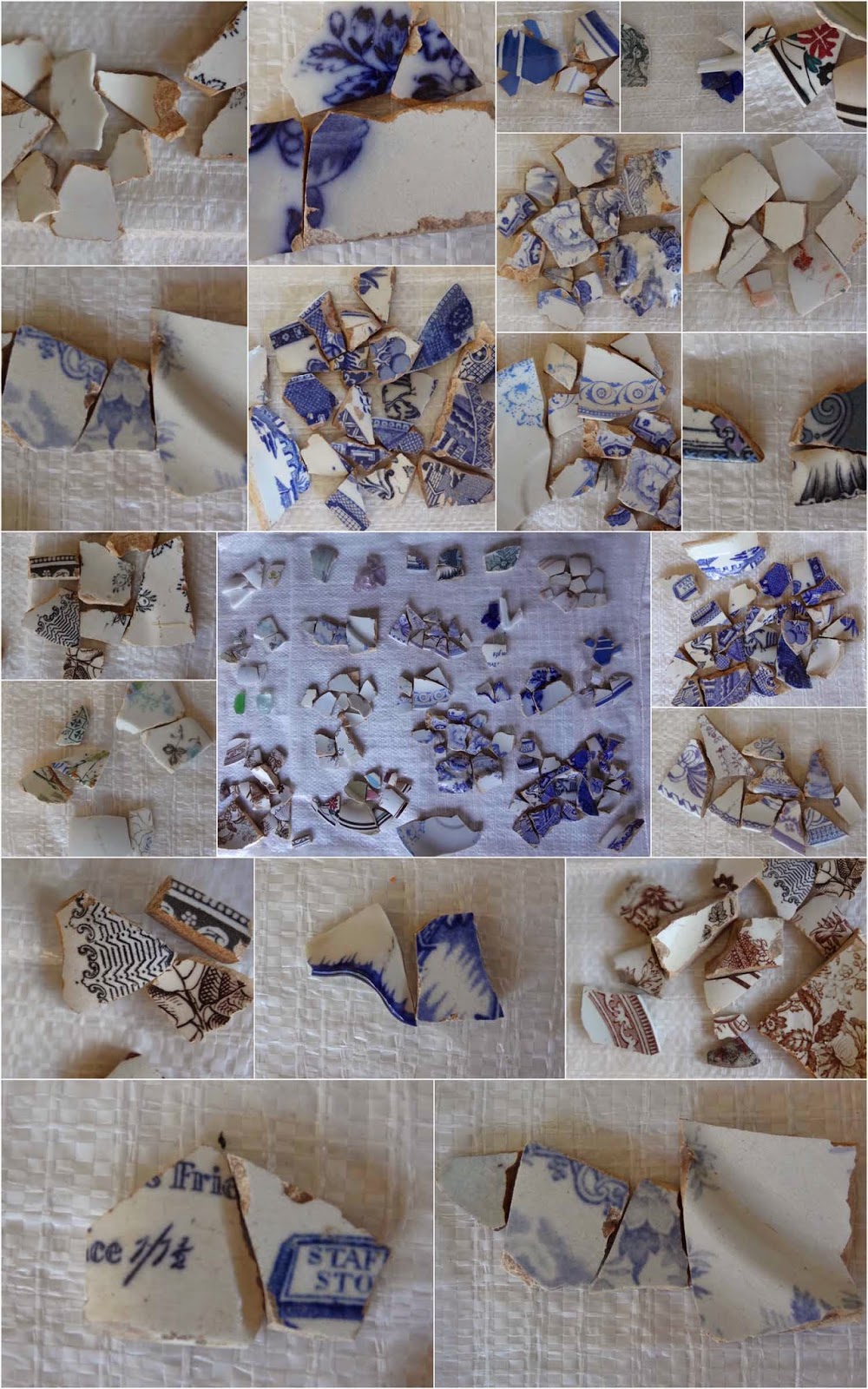 The patterns tell a story of a time long past when such history stayed with the house, buried in the garden for posterity, to be found as a link to a time & people long gone.

We no longer have that connection with our rubbish all collected so diligently.

However, I am sure that the original owner felt the same angst I do when I drop a favourite piece of pottery & that love of beautiful things link us …

The found bits will be used as a mosaic table top in time so that its connection to the house will remain; I am happy that I found the pieces & could look back over the history of the house through it.

Do you still have favourite china & pottery or old family pieces that are a reminder of the past?

Thanks for stopping by, I always enjoy your company & comments.
Dee ~♥~