Create the life you want to live in 2021

I am so grateful to each & everyone who stops by, reads, leaves a comment or just follows my blog. It is an important outlet for my creativity, thoughts & ideas; those who share this journey with me are special. 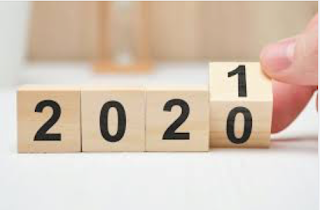 As 2020 comes to a close, we can but say - we did not see the past year coming. We could not foresee how our lives would change but we had to change with it, adapt & adjust to the changes.

It is important to realise that only YOU can create the life you want to live, people can support & help you but ultimately the choices are yours alone. You own your decisions & the mistakes. Your support chamber do not have to think or behave the same as you, because they are also walking their own path. We are all just walking each other home, but on our own path.

Each path has its own challenges, & this year has made me realise how some invalidate others experiences. Some people listen to reply, not to understand what you are saying; those who carry their burden well, still find it heavy. Many do not speak to complain, rather than to give voice to their experiences so it no longer has hold over them. Someone in life will always be better or worse off than you, but that does not invalidate your experiences. Sometimes when someone speaks of things that burden them, a kind ear is better than an unsolicited opinion or worse still a comparison. 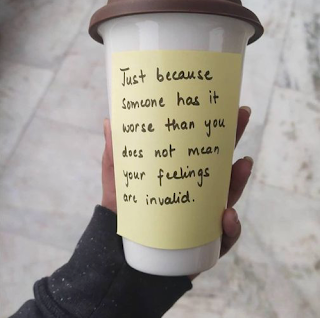 Considering the challenges in 2020, the cancelled holidays (2 special trips booked, 1 planned) the sudden loss of income as a self employed tutor, the limited contact between daughters who live north & south of us, my increasing elderly Father on another continent that I cannot easily visit, we have still been fortunate to have come through it ok. 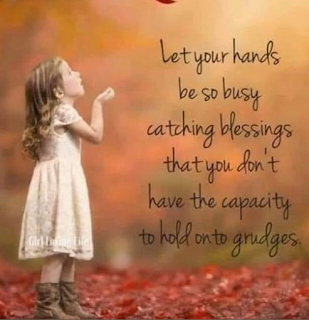 I have steadied my concerns with the simple rituals to keep me going -  being in my garden; cooking interesting meals even when various things were unavailable; growing more plants & giving them away;  sewing & gifting some of it;  walking my local woods & lake for green bathing to steady the mind; communicating with friends & family far & near; lots of genealogical research to keep me distracted, reading some of the books I have stacked up, growing plants from seeds as they need time to be nurtured. 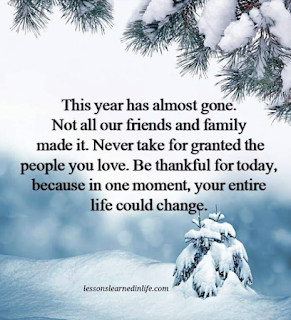 While staying in my space, I have used a lot of time to fill in the many family tree gaps across my vast ancestry tree. Focusing on what you can control, helps to still the things you can’t. My Dad has been amazing in helping to fill in the gaps where he can, what he remembers of my Maternal family line that is diminishing fast. It really brings home that once a connection is gone, it is almost impossible to get those answers.
Not everyone understands how having something to do, fills in the time & taxes the brain too ... 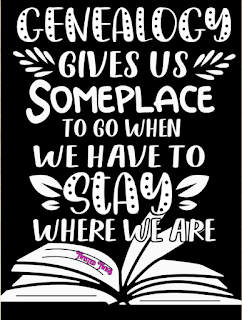 My thoughts moving forward
Life is short
Jobs are temporary
Health is wealth
The rainy days all come together - save for them.
Be thankful
Be kind
Friends & family are precious
Thank you for your company, each & every visit & comment is much appreciated. Be blessed as you move in to 2021. Carry hope, love & kindness with you 💖
Dee ~💕~
Posted by Dee at The Carlton at 14:13 No comments:

Bring light in on the Winter Solstice ...

In the bleak Midwinter, was a poem published in 1872 by the poet Christina Rossetti & in 1906, the composer Gustav Holst (of The Planets fame) set it to the music we know so well now.

In the bleak midwinter 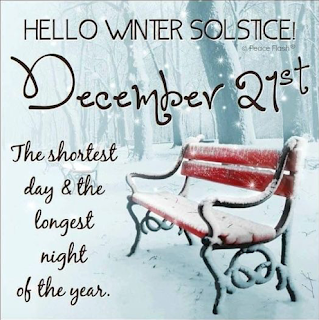 There are links to the previous Winter Solstice rituals at my home. 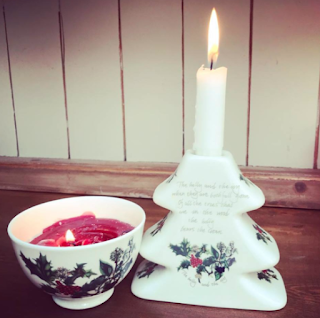 I will bring in the light again with candles about the house,  the holly & ivy on the door wreath & garlands, a reminder of the times past when it was common to bring greenery inside. 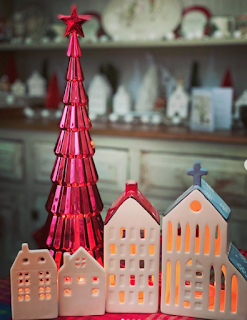 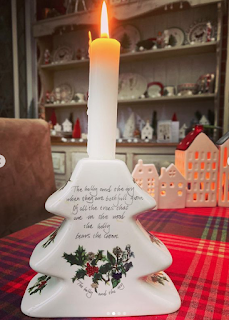 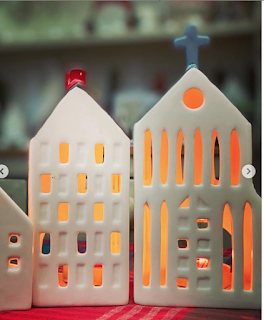 Have a blessed day as you observe the ritual of Winter & the darkness & light - the returning light is hope for brighter days, for the familiar seasons, for light ...
Thank you for your company, each & every visit & comment is much appreciated,
Dee ~💕~
Posted by Dee at The Carlton at 15:59 No comments:

Email ThisBlogThis!Share to TwitterShare to FacebookShare to Pinterest
Labels: Winter solstice return of the light candles

The Advent Sundays & other rituals in trying times ...

This ongoing crisis has bubbled alongside us for a staggering 273 days with no end in sight. Each time there is a glimmer of hope, it is snatched away & the despair is becoming paletahle now.

Our home decorations are unseen by friends who would usually join us for Xmas baking & suppers doing December. That cannot happen & it means the rituals we usually observe, have been set aside.

Sometimes, rituals are the things that you observe because they are familiar & comfortable; they help in difficult times as they give structure to events. The festive season is challenging enough normally when people are hothoused together & often the tasks fall unevenly leaving people feeling overwhelmed.

The familiar ones of listening to Carols, setting the table properly, of putting out crackers with dependable filings, the silliness of wearing the paper cracker hat, the reading of the silly jokes etc are things which set a rhythm to the day.

My late Mom used to buy advent calendars for the daughters when it was not a mainstream event & they could only be bought from specialist shops in Johannesburg, a reminder of the German influence that existed there.  This was Mom’s joy to hand them over & I have continued it ever since, even buying fabric ones that could be filled with chocolates I knew the family would enjoy. 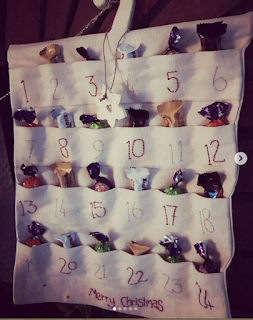 When I was growing up in South Africa, presents were opened in the morning, then my late Mom & Grandmother did the lunch; the table was always beautifully set & the crackers were laid out.  Us children used to sneak in & peek through the crackers for the nicest games or toys & then move them around & so it would continue. When we eventually pulled them, it was often not the one we had carefully manoeuvred as someone else had done the same thing. Those little cracker toys were in demand then, in simpler times.

After lunch, my Dad & Grandad would adjourn to the patio with the bowls of nuts in their shells & we would all eagerly select our favourites - the bitter almonds were seldom in demand, & then if we could not open them ourselves with the variety of nutcrackers, they would crack them for us so we would enjoy every single little bit of it. I still buy nuts as this is such a fond memory. This year, the two traditional nut crackers were no where to be found, I searched the familiar cutlery drawers (plural) and the cupboards but in the end I had to buy this modern one which does the job rather well .... 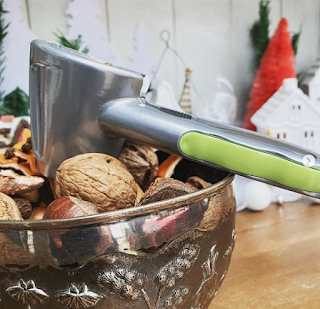 There always has to be an iced Christmas cake on the cake stand for the afternoon with a hot drink before watching the Queens Speech in the UK.

The afternoon is for games, songs, news - we used to play monopoly or cards at home. My Great aunt was a great card player & that was her influence. She had no children of her own & regarded her gaggle of nieces & nephews as fair game to impart her skills on.

Simpler times, these rituals evolve & I wonder which ones my family will continue & which ones they will treasure - too often this is not clear. 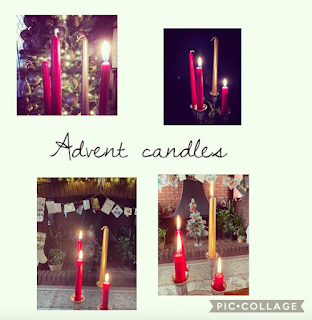 I have diligently lit my 4 Advent candles again, a nod to the Teutonic ancestry I have - the simple flame on the four Sundays leading up to Christmas just slows the pace & makes me reflect - mainly on those who are absent - my Mother was a Christmas baby & it is always a reflective time for me to ponder the opportunities missed, the times taken fore granted ....

I wish you a blessed time as you prepare for Christmas, however it will look this year.

Thank you for your company, each & every visit & comment is much appreciated,
Dee ~💕~
Posted by Dee at The Carlton at 15:03 No comments: