I apologise for my rather long absence but a rather impulsive travel plan got in the way of things.

Youngest daughter is home between finishing university & beginning her graduate scheme up north & I have enjoyed the rare opportunity of having her back in the nest. She accompanied us to visit my Dad in February & March this year in South Africa.

In May, while out for supper, we were talking about DNA & heritage - my largest DNA is Scandinavian which is a nod to all those fabulous explorers from Germany, Holland, Poland, France, Norway & Denmark who keep appearing in my tree prior to them setting off for Southern Africa in the mid 1600’s. 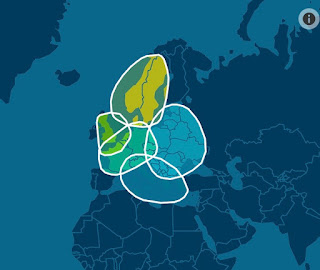 With barely 2 weeks to get ready, we set off on our 16 day tour which was almost like tracing my ancestry & it made me thankful that we live close to so many of these countries (in that they are not on the other side of the world.) 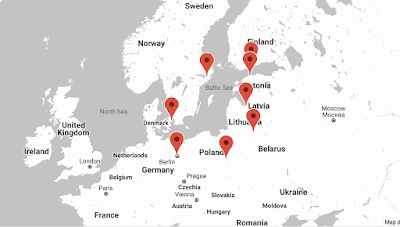 Belgium is lovely - perhaps because I speak Afrikaans so Flemish is understandable & it just feels comfortable. 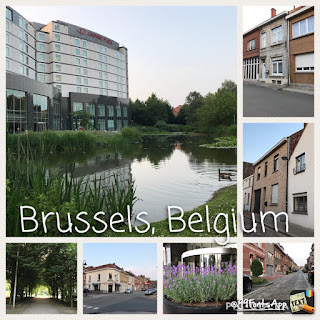 From Brussels, we headed to the lovely German capital, Berlin. I want to return to Berlin for a few days, our time was too short but it is such a stunning city with such an interesting (and dark) history that deserves more time to just take it all in.

It was a real highlight to stand at the Brandenburg Gate - the site of so many monumental changes & it is such an iconic & imposing structure.

The remains of the Berlin Wall is a sad reminder of recent history - I remember the fall of it & the jubilant scenes. To stand at the remaining part by Checkpoint Charlie and to see the sign indicating where Hitler had his bunker is very sobering - history is brutal & we need to learn it to stop us repeating past mistakes.

However, Berlin has so many exciting new buildings that herald in daring architecture & the future that I know I will return to explore more again. 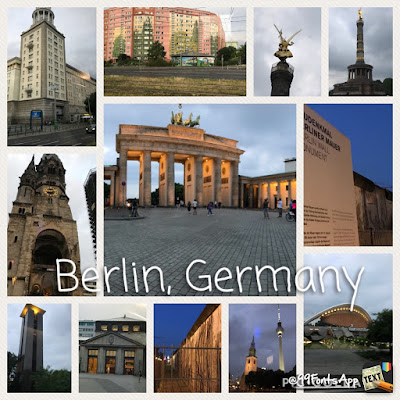 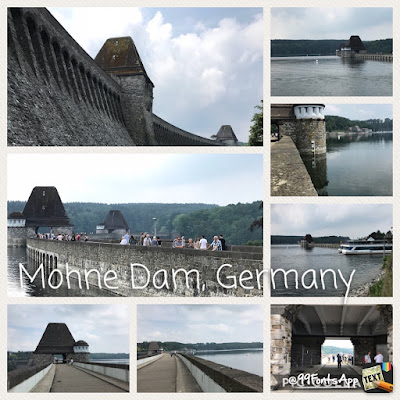 Situated at Gunne and 25 miles east of Dortmund, construction of the dam was started in 1909 and finished in 1913. The wall was made of limestone rubble masonry and was protected against seepage by a clay bank to about one third of the water side face and with overflow outlets near the top. This construction stood 112 feet high and had a base thickness of 130 feet tapering to 25 feet at the top and is 2100 feet long. The dam holds back 135 million cubic metres of water, covering an area of 3229 acres. It was protected before the raid by 2 anti torpedo nets in the water and anti aircraft guns of 20 and 37mm calibre mounted on the shore and on each of the two towers.
After the raid over 2,000 workers took just 4 months to rebuild the wall ready for refilling. The power station at the base of the dam was washed away along with most of its foundations and was never re-built.
Then we crossed from Germany to Poland as my great grandfathers family had done. I looked at the passing villages & thought of the route I was taking was a route they had known  - very strange feeling that somehow connected the generations.

Because we had booked at short notice, taking the last 2 places on the tour, neither of us had researched any of the places we would be visiting & we arrived in Warsaw without any expectations of the city - how wrong we were. What a fascinating & fabulous place it was - a definite favourite with both of us.

I loved how they celebrated Chopin with a very large statue in the park where open air concerts are held in Summer. Dotted about Warsaw were also 14 benches, placed in places of importance to his life. These benches each played a different piece of music & told the story of that connection. 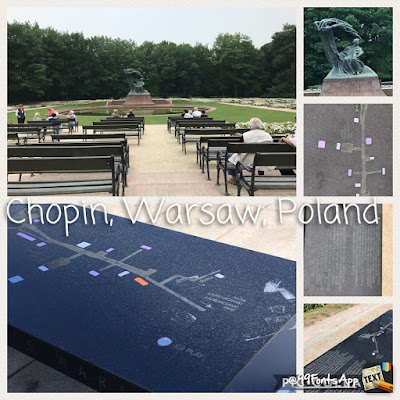 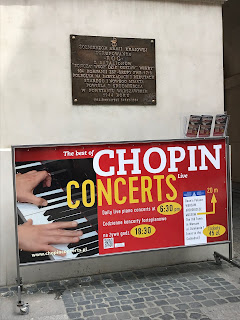 The Royal Palace gardens were quite a treat - influenced by the British layout of Royal gardens with fabulous Palaces & spaces. 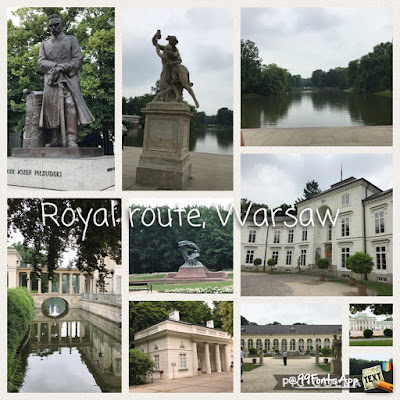 You cannot escape the dark past & recent history of Germany & Poland & in Warsaw, the Warsaw Ghetto site is a powerful reminder of the transportation & annihilation of the Jewish population. Anyone who stands on the site of the Warsaw Ghetto will feel the weight of history & know that they have a responsibility to keep that history sacred. 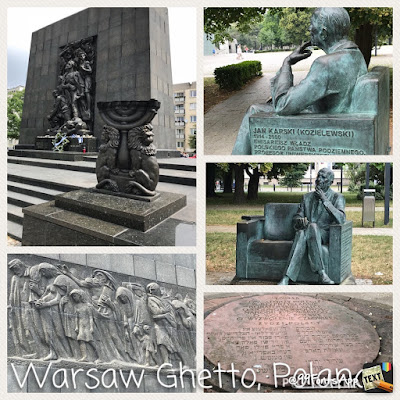 However, the City of Warsaw is much older than just that period of history, it is a proud city which had to rebuild itself after it was almost destroyed in WW11. The rebuild was a made to reflect the original & it is hard to know what was original & what was rebuilt.  It is just a fabulous place to explore. We loved the many cobbled streets with the churches, castle walls, little squares, fantastic architecture & just felt so at home there. 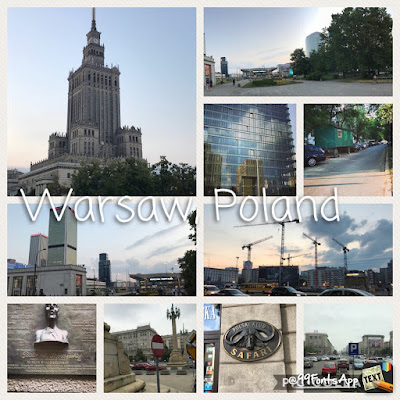 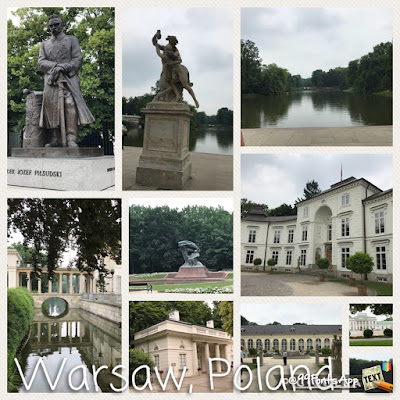 Lots of contrasting building & a lot of cranes on the skyline as the city expands. They had a very impressive tram system that crisscrossed the city & took workers up & down to cut down on traffic. 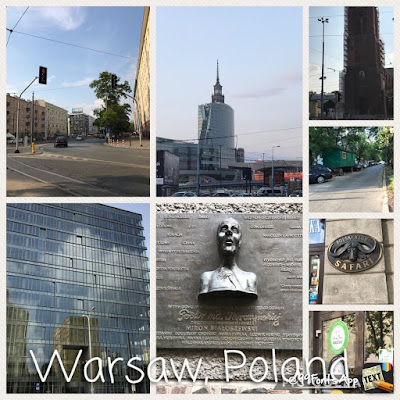 We always try to find somewhere authentic to eat when we travel - what better than to take advantage of a lovely street cafe opposite a lovely church. While eating a tourist horse & carriage came past - it was a relaxing time to people watch & to enjoy the atmosphere of this lovely city. 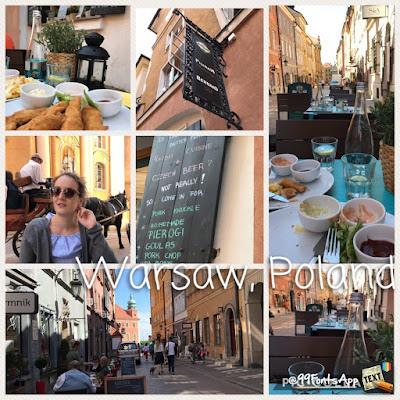 How beautiful is this Palace with its stunning architecture, I love the towers & their copper / green domes which dot the skyline. 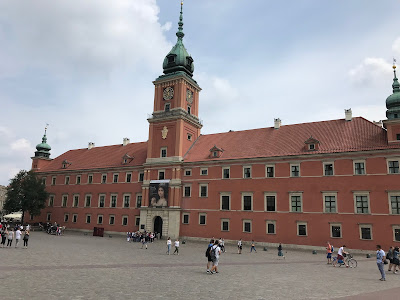 This square is simply stunning & the heart of the city; the gorgeous buildings just frame this space perfectly & the side streets were just as stunning, a truly beautiful city. 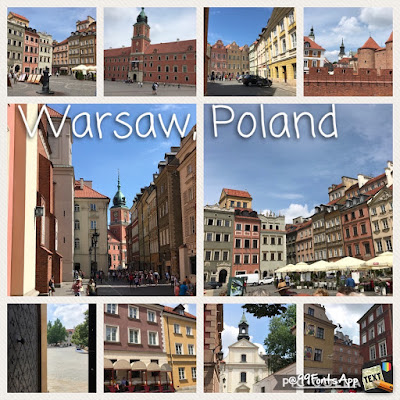 Our view while we ate our lunch ... 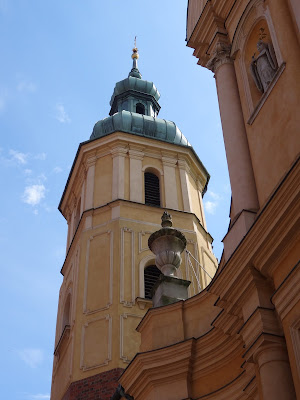 You could not visit Warsaw without paying homage to a truly inspirational lady - Maria Curie - Polonium was her discovery & named after her native Poland. My daughter is a Physicist & she was so thrilled to see this statue .... 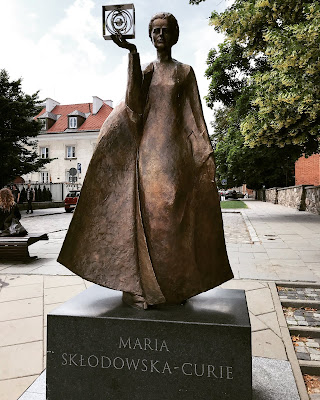 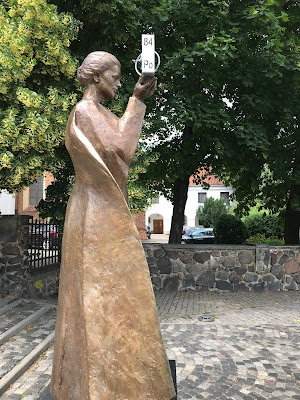 Just near our hotel, I came across a familiar logo - that of our British Annie Sloan. I use her chalk paints so often for projects & have done her courses so I had to pop in & say ‘hi’ & find out about her shop. 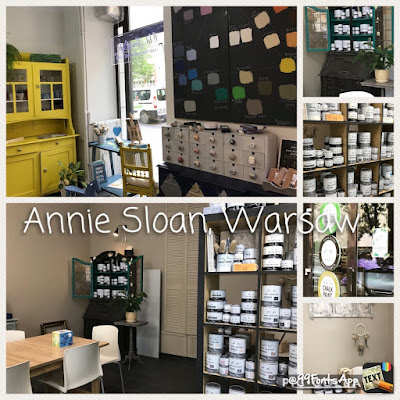 I hope you have enjoyed these images, more to follow. If you ever get an opportunity to visit Poland, seize it because it is simply stunning. Thank you for stopping by, please leave a comment or even just a ‘hi’ so I know you have visited.