A hibernation home is needed ....

Some months back a wondering star daughter & I came in late one evening & I caught a glint of something in the lights - we checked & found a large hedgehog making its way along the path. It was the first time I had been up close to one & it was so sweet, making hog noises & nudging its way between the shrubs for protection.

Our neighbour confirmed that he has often seen them out at night. Barely a week later, I found one on the lawn one morning - looking unwell in the rain so I googled advice & then picked it up with thick garden gloves, put it in a large cardboard box inside a taller plastic tub & our vet took it on & nursed it back to health before releasing it. 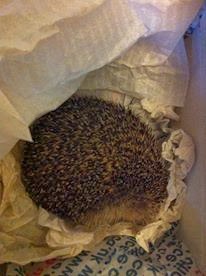 Since then, I have become more aware of these nocturnal creatures whose numbers are falling rapidly & are in severe decline.

Our local farm shop had her brother make us a hedgehog house. When daughter & I picked it up we were astounded by a hedgehog mansion he had made but we made room under our front shrubs for it because we know that several pass that way .... 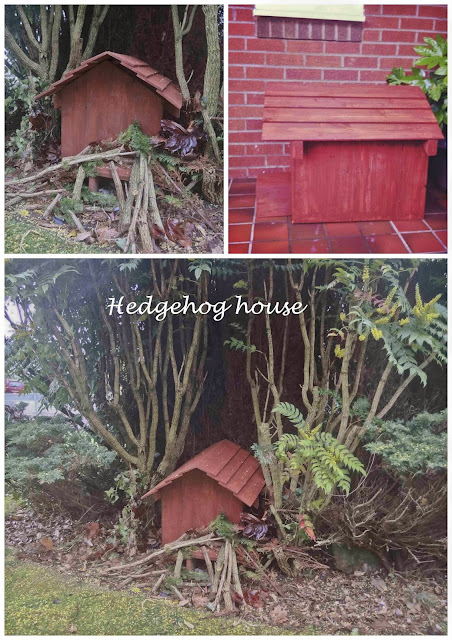 I have been topping up food in the house in front & have noticed that the twigs I put in front have been disturbed & the glass food dish I put in appeared at the entrance so I was hoping it was a hog in residence but I peeked & nothing ....

This morning, while I popped into the garden, I caught sight of a hedgehog making its way down our side alley way that connects the front & back of the house.  I called daughter & her chap Andy but it was gone. We found it in the garden - some 20m from where it had been seen so I knew it was healthy to be going along that quickly.

The advice for hedgehogs out in the day

A basic guide is:
If the hedgehog is walking purposefully, looking like it is going somewhere, and is walking along the edge of a wall, fence, hedge etc then it may have been disturbed from its nest and looking for a new one.

If it has a mouthful of leaves or baby then its moving nests and doesn’t necessarily need help, just monitor it to make sure it gets where it’s going safely.

We fetched the dry mealworms & cat pellets I have been putting in the front & it gobbled them up hungrily before heading into the large piles of leaves I always rake behind the hedges over winter.

We all knew that we needed a hedgehog house in the back garden too so we quickly gathered some wood that had been destined for the dump & made one up with a removable front section to clean out, add food & check up on any sleeping hogs. 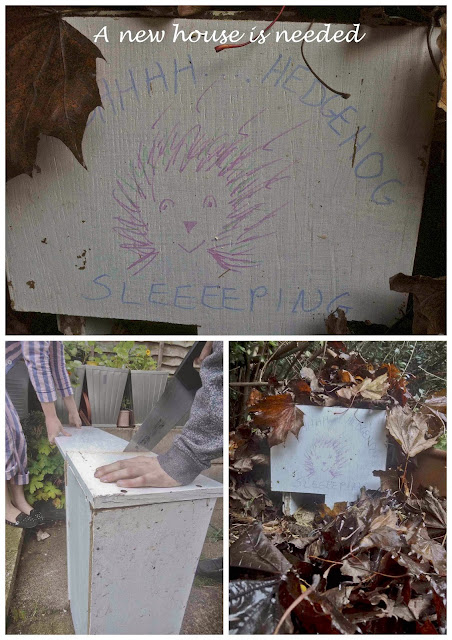 Daughter added her artistic touch to the house & it was placed beneath the side hedge with lots of leaves around it.  We could see the leaves along the hedges moving as he dug around for some worms then much later, after we were finished gardening, we saw him heading for his new home & munching on the treats we had scattered along the way. 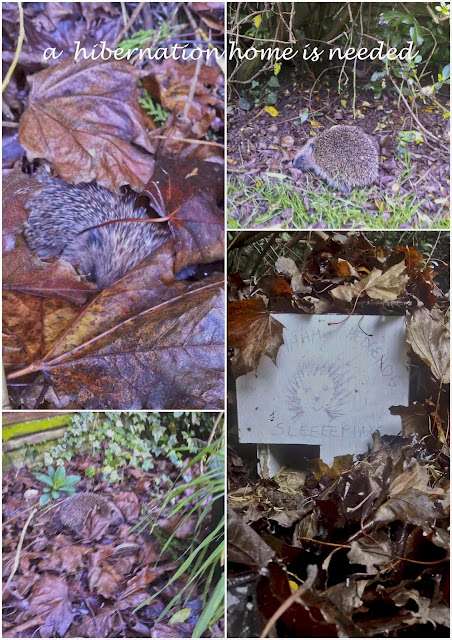 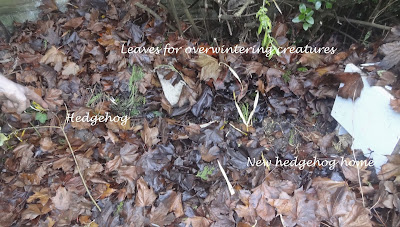 I hope this sheltered, hastily made but warm & dry abode will be used as a hibernation home over winter. I will check on it & top up the food & water.

We will now have time to make a more sustainable, solid home for the garden for next year but this one will help out for this winter which has arrived rather quickly so immediate action was needed.

A Wondering Star daughter has her hedgie story too so pop over & visit ...

Do you have a fondness for such creatures?  What garden visitors do you have?

Thanks for stopping by, your comments are always welcome

Email ThisBlogThis!Share to TwitterShare to FacebookShare to Pinterest
Labels: Hedgehog